Keep up with our latest innovations and announcements.

The following article was written by Audrey Schmitz for Progressive Dairy.

After a neighboring dairy installed fans in their freestall barns, Ryan Kroes was able to see firsthand the better results their neighbors had during the hot summer months. It was then Kroes and his family members decided they wanted to reduce heat stress in the summer and create a more comfortable environment for their cows at SunRidge Dairy, located in Nampa, Idaho.

“We have always noticed that in July and August, when it gets the hottest here in southwest Idaho, that we would always drop 8, sometimes 10 pounds of milk from our peak, which we will usually hit in June,” says Ryan Kroes, operations manager and fourth-generation dairy farmer. “We were always hoping to do something that would enable us to maintain peak production through the summer and then have cows in better condition transitioning into the fall.”

For years, Kroes always thought that putting in fans was too big of an expense, since Idaho is only hot for eight to 10 weeks out of the year where it is near 100ºF, he says.

“In Idaho, it’s a great cow climate, but over the years we’ve seen other dairymen invest in cow cooling, and they have given us good advice on it,” Kroes says. “They’ve seen the payback, and it was faster than they thought. So that’s why we wanted to go that route as well.”

SunRidge Dairy milks 3,000 Holstein cows 3X a day through a double-45 parallel parlor and houses them in two 1,200-foot-long freestall buildings. Kroes worked with Dustin Lickley of Progressive Dairy Services to order 72 VES-Artex ECVC circulation fans, B7 Construction to hang and mount the fans, and an electrician to do the wiring. All the fans were hung the first weeks of June, and the electrical was finished a month later in July.

“These guys knocked it out of the park with a systematic approach to getting everything measured out beforehand for the chain supports from the ceiling to the correct angle of the fan to hang,” Lickley says. “They had the fans and motor controllers pre-assembled and then lifted them in place and set the louvers to the correct settings for maximum air flow at the cow level.”

So far, Kroes says he has had a great experience with the fans.

“After installing the fans last summer, we peaked in milk production 5 to 6 pounds higher than in previous years; we maintained that higher level of milk production through July and August. And we had 9 more pounds of energy-corrected milk in August than in previous years,” Kroes says. “So that’s what we were always hoping to achieve is to help the cows peak in milk longer through the summer, and that’s what we saw. We also maintained and actually gained components in the milk as well and saw less of a dip in reproduction due to heat stress through the summer.”

When Kroes was looking to install new fans, he knew it was going to be a big project, so he wanted to go with ones that were as energy-efficient as possible and, for the most part, simple. He chose the VES-Artex Turntide Fans, which are a premium efficiency fan with a switched reluctance direct drive smart motor and fan blade assembly.

“The Turntide Smart Motor Controller uses wireless communication that allows for easy program changes if desired and no low-voltage signal wires need to be rerouted, which saves time and money on installation,” Lickley says. “We can also do updates to the software and firmware wirelessly.”

Kroes says with the Turntide Intelligent Barn powered by the DairyBOS barn operating system, he can access their app anywhere to monitor barn temperatures and humidity, and change fan speeds from his phone or computer.

“Through the app, I can turn the fan speeds down so we use less energy, or I can set fan speeds to an appropriate level throughout the day or evening. With a normal-style fan, they’re either all on or all off,” Kroes says. “These are more energy-efficient – and since these fans are bigger, they push more cubic [feet] of air, meaning we were able to install fewer fans. So, overall, there was less equipment and less electrical to run. They’re definitely more money, but I think that the payback is there just for some of those reasons.”

Kroes enjoys being able to view year-round graphs in the app of daily temperature and humidity indexes.

“We use DairyComp and keep track of our milk production,” Kroes says. “With the app, I’m able to use the temperature data from the fans’ DairyBOS app and compare it to what our production was.”

The Intelligent Barn can provide a consistent automated environment by controlling the lights for long day lighting, provide inlet or side curtain operation, soaking and high-pressure fogging in addition to the fans. Kroes says in the future he would like to add soakers above the feedline to tie in with the fans.

“I enjoy seeing the cows more comfortable and productive and in better condition coming out of the summer,” Kroes says. “It also makes me feel good knowing we are setting our cows up for success and enabling them to reach their genetic potential.”

With the results Kroes has seen, he says it’s a no-brainer to invest in cow comfort and in your cows’ future.

“My dad has always really wanted to invest in cow comfort, so we really take pride in having comfortable cows,” Kroes says. “We’ve always been a pretty well-run herd and have always achieved pretty high production, and we just feel like this helped take us to the next level.” 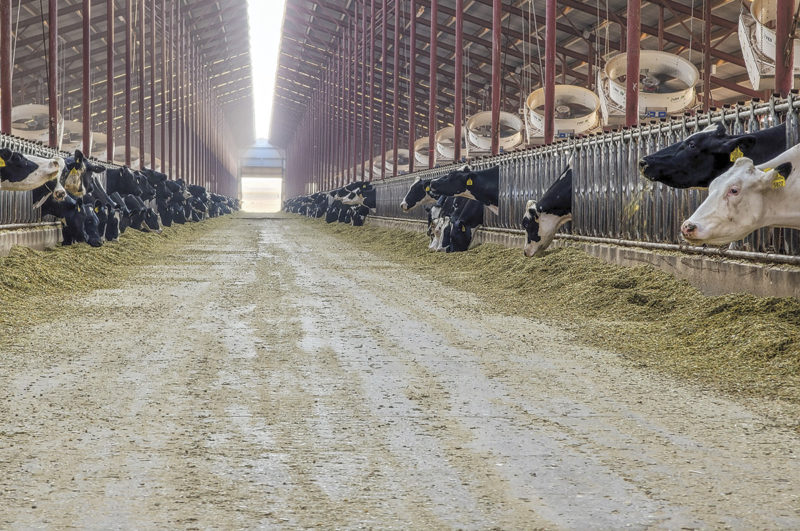