Keep up with our latest innovations and announcements.

Below is an article from the December 2022 print issue of Dairy Farmer, a UK-based dairy publication published by Farmers Guardian.

In an era of soaring electricity costs, it seems counter-intuitive to fit energy hungry ventilation fans to cool cows but, balanced against the health, production and welfare losses resulting from heat stress, many dairy farms see them as a sound investment.

Dairy cows are very sensitive to temperature – starting from 22degC and 50% humidity, they accumulate heat in their bodies and this reduces milk production.

Even when a shed is naturally well-ventilated, there are days when cows come under pressure from heat stress.

Huw Jones, of VES-Artex, which specialises in ventilation in dairy cow accommodation, says there is a very strong case for installing fans.

“If the environment is not right the cows will not perform,’’ he says.

As farms transition to a housed system, they are often using buildings that were not designed for housing cows in the summer months, he adds.

“Often when the older buildings were constructed, there was no thought of them housing cows in warmer conditions.

“We also see examples of farmers extending or widening existing buildings without consideration of how this will affect the natural ventilation of what they have currently.’’

A building located in a wind shadow among others, which prevents ventilation, is a major issue in the UK.

Retrofitting fans will provide some consistency for the cow by maintaining an air exchange in the winter or air velocity in summer.

Mr Jones says: “A cow craves consistency in her day, but in general, for UK housed systems, the one area which lacks consistency is the climate she is in.’’

Airflow will take the path of least resistance – for example, the biggest resistance in a shed is the cow, a headlock and a cubicle. Air never consistently reaches a cow naturally.

The key to creating a comfortable environment is the placement of the fans.

It is all about air movement at a cow level and to achieve an effective cooling velocity at cow level that is great enough to mitigate heat stress.

When a ventilation system is designed, the air speed target at the last cow from the fan should always be the determining factor when deciding fan spacing.

The wind chill effect does not work if the air speed is above the cow’s head, which is why systems must be designed for air velocity at cow level.

In a British climate, Mr Jones recommends aiming for a minimum of two metres per second at the last cow away from the fan. This would mean that a 72-inch fan would typically be spaced at between 15-18m, depending on barn design.

He advises starting with the critical areas for cooling first.

“The holding pen should be a priority when looking at mechanical ventilation. There is very little gain to be made by having a well ventilated barn if the holding pen is still causing heat stress,’’ he says.

All cows will use the holding pen at some point and it is the area under greatest strain during warmer weather.

“You will never get as high a density of cows anywhere else on the farm, effectively you have hundreds of 1.5kw heaters gathered in one place,’’ says Mr Jones.

There are simple methods to establish where and when the heat stress is occurring. He advises that using a rectal thermometer will give the most accurate indication.

“She might have been 38.5degC coming into the holding pen, which is pretty normal, but that might have risen to 39.1degC when she gets to the parlour, a 0.6degC increase,’’ says Mr Jones.

Typically 39.1degC is recognised as the starting point of heat stress.

In the housing itself, start with the cubicle beds.

“You want the cow to be lying there for 14 hours day and she will typically maintain her feed and water visits when fans are located there,’’ says Mr Jones.

Other points to consider are stall layout, crossover location, prevailing wind or where the slurry store or silage pit is located in relation to the housing, to ensure the air being brought into the barn is the best quality it can be for the cows.

At higher temperatures, other means of cooling, such as soaking, need to be considered in combination with air velocity, Mr Jones recomends.

“Perhaps, as average temperatures increase in the British climate, there will be need for adding additional fans along the feedlines or soaking systems.’’

In the field - Mark and Caroline Davies, Little Newcastle, Pembrokeshire

Pembrokeshire dairy farm calculates that retrofitting fans into cubicle housing to keep cows cool is worth £27,000 to the business.

Mark and Caroline Davies built new housing for their herd of 250 Holstein Friesian cows at Newhouse Farm, Little Newcastle, in 2017.

Although the sides were left open to allow natural ventilation, on still days it was not enough and on hot days cows were suffering from heat stress.

This was impacting on udder health, fertility and milk yields and general illness in the fully housed herd.

To improve the environment, six 72-inch fans supplied by VES-Artex were installed over the cubicle beds in the spring of 2021 and a 55-inch model over the calving area, all variable speed and automatically controlled.

Mr Davies says: “These were fitted seven or eight feet above the cubicle beds so that air would blow over the cows when they are lying down.’’

“We are no longer seeing the health and production problems we had, it is a big relief.’’

Each fan cost £2,000 and, as they required three phase electricity, the installation costs were £7,500.

Mr Davies says that the over the entire year the fans add 5-10% to energy costs and 15-20% during the peak months.

But, balanced against the benefits, they provide a good return on investment, he adds.

In a system that produces 2.7million litres of milk, the savings to the business from not losing milk yield and fertility and by retaining cows in the system that might otherwise have been culled due to mastitis and other issues, adds up to £27,000 a year.

Mr Davies adds: “That is equivalent to 1ppl in milk income.’’ 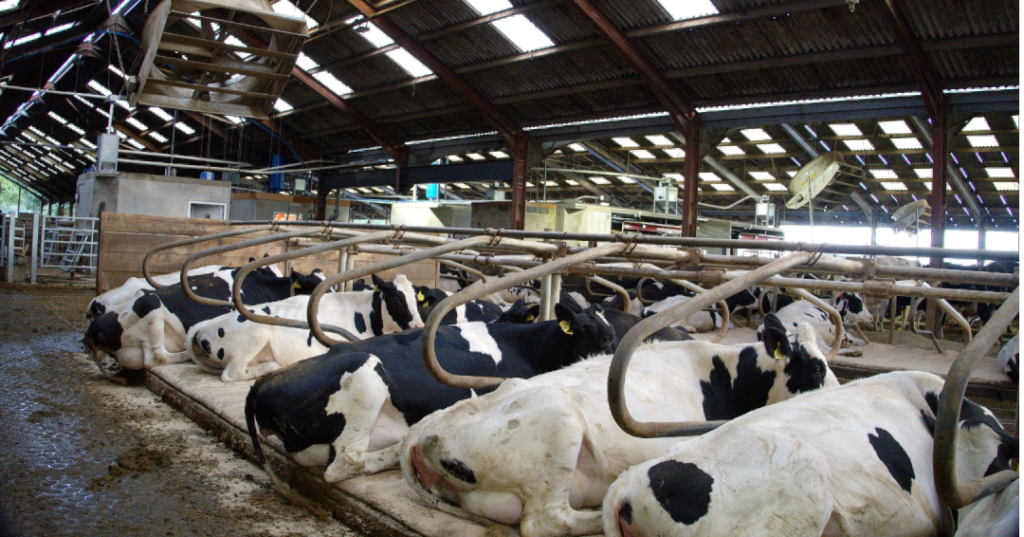