Introduction/Problem Statement: VES-Artex designed this on-farm assessment to determine how well a current VES-Artex ventilation system combined with feed line and holding area soaking is mitigating heat stress and maintaining the internal barn environment in an upper Midwest dairy environment. The main issue we were seeking to explore was three-fold. First and foremost is why it is so crucial to limit the magnitude of heat stress and the internal barn environment temperature and the direct relationship on cows’ decreased milk production. Additionally, we sought to bring clarity to the impact of a partial neutral pressure ventilation system in a 1200'L barn on the outside THI versus THI inside of the barn. Traditionally, tunnel barns over 500'L were not recommended because it was thought that the rise in temperature, humidity, and noxious gases would be excessive. Furthermore the correlation between Barn THI and Average Core Body Temperature (CBT) rise were compared.

The purpose of this assessment was to determine the effects of heat stress conditions with the current heat stress mitigation strategy on a sample lactating cow population at an Eastern Wisconsin dairy (“The Dairy”). The Dairy’s lactating Holstein cows are housed in two partial neutral pressure ventilated barns and are milked in a double 40 parallel parlor. The trial was conducted in Barn 1, which is to the immediate north of the milking center. Barn 1 has a four-row tail to tail layout, separated into four 2-row pens. The curtain inlets for Barn 1 are at the west end of the barn on the north and south sidewalls. Positive Pressure Fans (PPFs, 26 – 55") are located down the length of the barn on the north and south sidewalls to supply additional fresh air into the barn. Barn 1 is exhausted by a row of fans on the north and south side walls at the furthest east end of the barn (AFRs, 32 – 72"). This calculates to 36 whole barn air exchanges an hour. Each pen has 8 – 55" Effective Cooling Velocity (ECV) fans over the inside row and 11 – 52" panel fans over the outside row. Each pen has 269 stalls and an average of 330 cows, a stocking density of 122%. Given this number of cows, the exhaust cubic feet per minute (CFM) per cow would be 1,040. All pens are outfitted with feedline soakers. Pen 2 has 5 water sources, (2) 17" × 10" troughs at the far ends of the pen up against the stalls, (1) 31" × 72" trough in a crossover that is accessible on all sides, and (2) 24" × 70" troughs in crossovers that are accessible on all sides. This calculates to 2" of linear accessible water space per cow.

The parlor has 5 – 48" exhaust fans blowing into the front of the parlor and the holding area has 4 – 72" PPF fans blowing in the front of the holding area. The air is exhausted by 12 – 48" fans. Assuming a capacity of 20,000 CFM for the 48" fans and a capacity of 42,000 CFM for the 72" fans, there would be 268,000 CFM forced into the milking center and 240,000 exhausted. The total air exchanges an hour is calculated from the total amount being introduced, giving 89 air exchanges an hour. There are 15 – 48" panel fans providing velocity to the cows in the holding area in 5 rows of 3 fans, with 8’ between fans within a row and 20' between rows. Soakers are also hung over the cows in the holding area.

Data was gathered by placing intra-vaginal HOBO temperature loggers in a representative sample cow population and environmental HOBO temperature/humidity loggers were placed at four locations on the farm. A total of sixteen cows in Pen 2 that met the following parameters were selected to participate in the trial: above pen average milk production, second lactation, greater than sixty days carried calf, and below herd average SCC. The trial was conducted from 1:00 PM on June 25 to 6:30 AM on July 3. Temperature Humidity Index (THI) was used to assess the severity of heat stress, a calculated value that utilizes temperature and humidity to assess the ability of cows to dissipate heat. Gathered data was used to analyze outside versus pen THI, implanted cow core body temperatures (CBT) versus pen THI, and implanted cow milk production versus average CBT.

Figure 1 (below) shows that during the day on June 25th – 27th and on July 3rd, inside the barn was a lower THI than outside. From June 28th – July 2nd, the THI was only a single point higher inside than outside. This would indicate that the ventilation is effective at maintaining the environment in the barn during periods of heat stress.

Figures 2-4 (below) show the comparison between average core body temperature (CBT) and Pen 2 THI. The THI is graphed on the primary y-axis and the CBT is graphed on the secondary y-axis over time of the trial. The horizontal red line corresponds with a temperature of 102.2°F, the CBT where heat stress is defined to begin. The cows’ CBT rose above 102.2 ᵒF every day except June 27 and 28th (Figures 2 and 3). On the 25th the average CBT rose above 102.2°F at 4 PM and on the 26th the cows’ CBT rose above 102.2 briefly later in the evening, from 8 – 10 PM (Figure 3). From June 29th to July 2nd the cows’ CBT rose above 102.2 by 2-3 PM in the afternoon (Figures 4 and 5). The time it took the cows to dissipate this heat gain was variable, by early evening on the 29th – 1st but not until early the next morning (2-3 AM) on the 2nd. Vertical lines demarcate times when the animals were being milked. 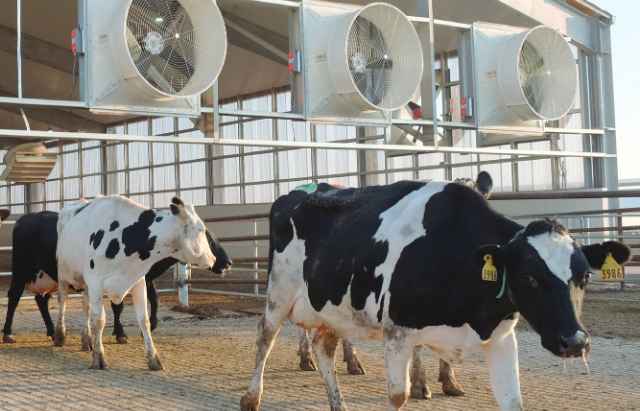